Perfect Records On The Line For Both

In This Battle Of Welterweights

Garcia is stepping up two weight classes from his last fight to challenge Spence for the welterweight title in Texas, not far from the Dallas suburb of DeSoto where Spence grew up a lifelong Dallas Cowboys fan. He will be fighting in Texas for the ninth time as a pro and expects to be supported by the large contingent of Mexican and Mexican-American fans that will be in attendance.

“Errol Spence Jr. vs. Mikey Garcia is a matchup of two highly-skilled and accomplished fighters in a true blockbuster showdown,” said Tom Brown, president of TGB Promotions. “Fans will get to see the hometown hero Spence against the Mexican-American superstar Garcia with huge contingents of fans uplifting them to put on a performance to match the moment. Combined with a jam-packed pay-per-view undercard of action fights, this has all the makings of a once-in-a-lifetime event.”

Garcia’s task has historical parallels to the paths taken by famous fighters like Roberto Duran, Shane Mosley, Juan Manuel Marquez, and Manny Pacquiao, all of whom moved up multiple weight classes to challenge all-time great welterweights. Duran, Mosley and Pacquiao were both successful in moving up from lightweight to defeat Oscar De La Hoya, while Marquez’s rise to welterweight was stopped by a decisive loss to Floyd Mayweather.

On the other hand, Spence is a power-punching welterweight who has stopped his last 11 opponents. With a clash of two boxers in some top-five of the mythical pound-for-pound rankings, the winner will be able to stake a claim as the best boxer in the sport today. 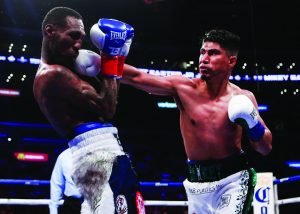 “Spence vs. Garcia is an event that transcends boxing and is a coronation that will crown the new ‘King of Boxing,'” said Richard Schaefer, Chairman and CEO of Ringstar Sports. “In addition to the main event, fight fans will be treated to a spectacular night of boxing featuring three of the most exciting Mexican fighters in the sport in David Benavidez, Luis Nery and Chris Arreola. This is exactly what a pay-per-view card is and should be all about: entertainment and non-stop action from the first bell to the last!”

Spence (24-0, 21 KOs) is no stranger to big stadium events as he won the IBF title by traveling to England to take on then-champion Kell Brook at Bramhall Lane soccer stadium on May 27, 2017. In front of a raucous crowd of over 27,000 loyal Brook supporters, the 28-year-old Spence wrested away Brook’s title in the 11th round.

“We are proud to host a boxing match of this magnitude with Errol Spence Jr. and Mikey Garcia,” said Dallas Cowboys Owner, President, and General Manager Jerry Jones. “AT&T Stadium was built to house the greatest sporting events on the planet, and we feel we have another incredible boxing event on the horizon with this matchup in our building on March 16.”

This will be Spence’s third defense of the title. After beating Brook, he successfully defended it with an eighth-round stoppage of two-division champion Lamont Peterson and then knocked out mandatory challenger Carlos Ocampo in the first round during the fight in Frisco, Texas, on June 16. Spence turned pro shortly after representing the U.S. at the 2012 Londo

In Olympics with much promise and rose to the championship ranks with wins over former champion Chris Algieri and veteran contenders Leonard Bundu, Alejandro Barrera, and Chris van Heerden.

“I can’t wait for March 16th. It doesn’t get bigger than this,” said Spence. “Fighting at AT&T Stadium in my hometown is a dream come true. If I beat Mikey Garcia the way I plan on beating him, I will be THE guy in the sport. This is my year and Mikey isn’t going to stop me. I am training like this is the biggest fight of my life and I want to put on a great show for the fans and win convincingly.”

Garcia (39-0, 30 KOs) is striving to put together a legendary career and is aggressively pursuing that goal. He has won world championships at featherweight, junior lightweight, lightweight, and junior welterweight. Fighting out of Moreno Valley, California, Garcia unified the IBF and WBC Lightweight World Championships in his last bout by scoring a unanimous decision victory over Robert Easter, Jr. on July 28. In the fight against Spence, he will be within striking distance of a welterweight title. 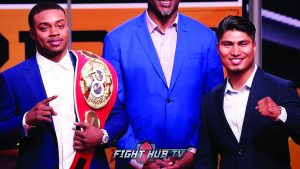 Tickets for this showdown, which is promoted by TGB Promotions and Ringstar Sports, are on sale now and can be purchased at SeatGeek.com, the Official Ticketing Provider of AT&T Stadium.

Fans get ready for the fight the year! UPPERCUT magazine will be there to cover all the action for you. So stay tuned and read our next issue or just go to our website proceeding the fight to catch every detail.

Previous: So Cal Basketball: Will The LA Lakers and LA Clippers Go To The Post Season?
Next: Samsung Unveils The Foldable Smartphone: The Next Generation of Smartphones

This site uses Akismet to reduce spam. Learn how your comment data is processed.