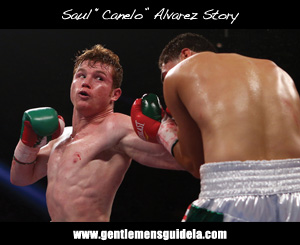 There is a terrifying force of nature on the horizon. It’s a redheaded boxer whom they call “Canelo”. Saul Alvarez is his given name and has boxed since he was five years old. Alvarez is a cool, calm, and collected fighter,” says boxing writer David Avila. “Canelo is a force to be reckon with in the boxing world today.”

Often described as a pressure fighter Alvarez is becoming a master of angles and is excellent at cutting the ring off from his opponent—but that doesn’t do him justice.

His patience and maturity inside of the ring is indicative of his boxing cunning. He lulls his opponents into a serene state—entrancing them within the eye of the storm. And then he brings the thunder—in the form of two clenched fists. Alvarez’s combinations are traumatizing. His hand speed is blistering. His head movement is deceiving. His need to be great is insatiable.

Alvarez has been able to put together an incredible record made up of 42 wins and zero defeats and he takes this inextinguishable will to win with him when he ducks his head under the ropes and steps into the ring with pound-for-pound kingpin Floyd Mayweather Jr., on September 14 at the MGM Grand in Las Vegas.

But before Alvarez’s attempt to shape his future for glory, take some time to reminisce about his past. “Canelo” Alvarez’s is an impressive boxer who may just have a shot at been one of boxing greats.

For now Canelo sets his sight on defeating his next opponent in Floyd Mayweather Jr. Canelo, he believes Mayweather is a great fighter but, he’s Canelo believe he’s greater and better than Mayweather. Canelo, believes he will be victorious in his battle against the trash taking Mayweather.

As the press conference have been taking place around the country Mayweather continues to trash to and Canelo sits back patiently and says he’ll do all his taking in the ring on Saturday September 14. Canelo when on further to say talk is cheap, unlike Mayweather, Alvarez has kept the trash-talking to a minimum in the lead-up to their Sept. 14 bout in Las Vegas for the WBA and WBC junior middleweight titles.

Canelo says that he understands the fight needs to be promoted and Mayweather feels he has to talk it up. But, for him trash talking isn’t his style. Canelo says, bluntly, that he will do his talking in the ring against Floyd Mayweather Jr.

Canelo played the role of the strong silent type in his first national media conference call to hype his super fight with Floyd Mayweather Jr. on Sept. 14, killing Mayweather with kindness instead of name calling on Tuesday. While Mayweather has mocked Alvarez and his quality of opposition, the 23-year-old from Mexico has taken the high road and remained almost unbearably humble and complimentary toward his opponent.

If Mayweather’s strategy has been to belittle, then perhaps it’s Alvarez’s strategy to lull his opponent into a false sense of comfort in the run-up to their bout, which will take place at a catch-weight of 152 pounds in Las Vegas for the WBA and WBC junior middleweight titles.

“The only thing I can predict is that I will win the fight,” Alvarez said, in his brashest moment of the call. But that was as far as he went.

Does he think Mayweather has declined at the advanced age of 36, he was asked? It was a logical question, given that most fighters start to slow down at some point. But Alvarez (42-0-1) didn’t take bait, adeptly parrying the question. Mayweather was not on the call and will have his turn on Wednesday.
“No, not at all,” Alvarez said through a translator, the Golden Boy matchmaker Eric Gomez.
“I think he’s a fighter that maintains himself and takes care of himself and I still think that he’s at his peak. I think he’s still Mayweather.”

Alvarez’s record, like his 2011 win over Ryan Rhodes for the WBC super welterweight title, doesn’t impress Mayweather. Does he think Mayweather is a dirty fighter based on Alvarez using sparring partners that have employed their elbows in sparring? Alvarez shrugged off that question, saying: “I’m not saying he’s a dirty fighter. I would never say that. But he’s a fighter with a lot of experience and sometimes he uses his forearms but those are tactics and he uses those things to his advantage.”

Did it bother him that Mayweather has suggested that his previous bout with Miguel Cotto will be tougher than his fight with Alvarez on Sept. 14, he was asked. For the first time in the conference call, Alvarez seemed to bristle.

“That’s good that he’s thinking that way,” Alvarez said. “The day he gets in the ring with me he’ll see for himself whether it’s a tough fight or not.” Meanwhile, in a role reversal, it’s been Alvarez’s promoter, Oscar De La Hoya, the former fighter, who has boasted of Alvarez’s strengths and predicted a knockout for his fighter in eight rounds or less, a refrain he repeated on Tuesday. De La Hoya counts himself among the list of opponents who have lost to Mayweather.
The most Alvarez would admit to is that he feels “confident” he will win and that he has a good game plan for beating Mayweather- who remains undefeated at 44-0 with 26 knockouts- but he demurred when he was asked what advantages he had over his older opponent.” I just feel confident I’m going to win,” Alvarez said. “I have my game plan and I’m going to go in very smart. I can’t say if I have many advantages but I have a very good game plan and I know I’m going to win the fight.”

Alvarez took issue with the idea that he has nothing to lose on Sept. 14 since he likely will have many more big fights in his future because of his youth. “I have a lot to lose,” he said. “This is a fight that’s super important to me.”

Alvarez revealed that Mayweather never irritated him during their nine-city press tour to promote the fight, something that came across in the conference call.