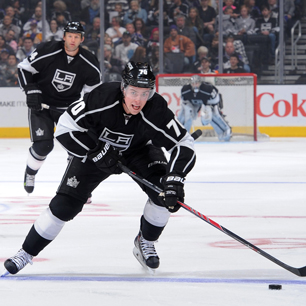 The Los Angeles Kings hope to defend the championship in their 48th season for the National Hockey League. History of the Kings

Jack Kent Cooke founded the Los Angeles Kings franchise on February 9, 1966 after he had been awarded an NHL expansion franchise for Los Angeles. The team’s home arena was stationed at the Forum in Inglewood for thirty-two years until they transferred over to the Staples Center during the start of the 1999 – 2000 season. The team had struggled for success in their early years. However, the team’s strength multiplied greatly when Bruce McNall, who purchased the Kings in 1987, acquired the league’s best player, Wayne Gretzky, in a trade with the Edmonton Oilers. Under Captain Wayne Gretzky, the Kings earned their first division championship in the 1990 – 1991 season. Shortly afterwards, the team, led by Wayne Gretzky, Hall of Famer Luc Robitaille and defenseman Rob Blake, earned their first Conference Championship and played in their first Stanley Cup Finals in the 1992 – 1993 season. Unfortunately for the Kings, the team lost to the Montreal Canadiens (1 – 4). The Kings were plagued by financial problems after their loss in the 1993 Stanley Cup Finals and even went bankrupt in 1995 until Philip Anschutz and Edward P. Roski acquired the organization. The franchise experienced little success afterwards and went into a six-year playoff drought until they broke it in the 2009 – 2010 season. However, the Kings began to resurge after Darryl Sutter was hired as the team’s coach in the early 2011 – 2012 season. Under Coach Sutter, the Kings won the Stanley Cup twice in three years. They won their first Stanley Cup in 2012 against the New Jersey Devils (4 – 2) and the 2014 Stanley Cup against the New York Rangers (4 – 1).

Struggling for a Repeat

Entering the 2014 – 2015 season, the Kings have high hopes to defend their championship. They had a rough start to the season, with the loss of their defenseman Slava Voynov on October 20 due to arrest on domestic violence charges. With the regular season halfway through, the Los Angeles hockey team currently ranks fourth with a record of (19-13-9), trailing behind the Anaheim Ducks, Vancouver Canucks, and San Jose Sharks, in the standings of the Pacific Division of the Western Conference. Although the Kings overall strength on paper remains approximately the same as last season, the team has not been encountering as much success this season. Scoring 47 points in 41 games isn’t that impressive of a performance. Their current home record is 14 – 5 – 3 and their road record is 5 – 8 – 6; the team has a 8 goal differentiation, with 115 goals for them and 107 goals against them. The big issue that is holding the team back is that the Kings struggle to perform as well away as they do at home. Their performance this season has slumped, soared, and slumped again. This inability to stay consistent from the team this season has led many people to wonder how they managed to win the Stanley Cup last season. Nevertheless, there is still a chance for the Kings to repeat as champions once more. Although placing first in the standings of the Pacific Division of the Western Conference seems out of reach, the Kings only need to place at least third to qualify for the playoffs. Additionally, they can qualify for playoffs if the team steps it up and becomes the next two highest placed finisher of the Western Conference after the top three teams from the Central and Pacific Division. While the Kings chances to repeat, as champions in the 2014 – 2015 season seem grim, the team still has half a season to pick up their game and prove to the hockey industry why they were champions last season. In fact, based on previous seasons, the Kings usually don’t hit their stride until the playoffs, so don’t count them out of the running just yet.

Previous: The Dodgers Continue to Attack the Strike Zone
Next: Road To The Finals